Young Friends of the Earth Cyprus is part of a pan-European project, led by Friends of the Earth Europe  groups in Cyprus, Malta, Ireland, Denmark, Estonia, North Macedonia, Spain, Croatia and Austria. Our aim is to build platforms across Europe to bring young people from under-represented communities into multi-levelled decision-making and build strong, collective visions for a socially just and ecologically sound future. We strive for intersectionality and inclusiveness.

If you want to learn more about ongoing Young Friends of the Earth events, visit their page.

In December 2019, the European Commission (EC) presented the European Green Deal (EGD), a “new growth strategy” consisting of a broad and ambitious roadmap aiming to “transform the EU into a fair and prosperous society, with a modern, resource-efficient and competitive economy”.  It’s main aim is to “make Europe the first climate-neutral continent by 2050, boosting the economy, improving people’s health and quality of life, caring for nature, and leaving no one behind”.

Plans under the Green Deal include: 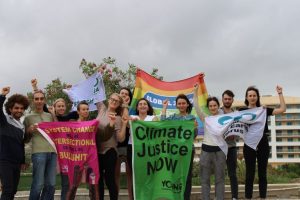 Youth across Europe want more than that and they made their voices loud and clear!

As a result of SYSTEM:RESET project from multiple organisations we are excited to present ‘The Youth Proposal for a Green Deal for Europe’. This proposal highlights the need for change, the need for a better future that is socially just and ecologically sound. Not only must our future include healthier environments, restoration of the commons and reduced pollution, we are pushing for better access to education, a respect for different cultural backgrounds and the redistribution of wealth to support the Global South. This is not just a vision for the future of the environment, it is one for people across the world to bring forth climate justice and social justice.

Read “The Youth Proposal for a Green Deal” here!